When you’ve been doing the same thing for a while, the fire can dim a little. It’s still there, still keeps you toasty and cozy, but maybe it doesn’t rage like it did before. Maybe you take it for granted, just a bit. And when you’re down to the embers, what you need is someone who’ll take a seat at the hearth and remind you that the fire’s still there, and you can always bring it back to life – it’s just gotta get stoked. Our youngest team member is the fuel to our fire, fan to our flames, and, frankly, fuckin’ fantastic. Please give your warmest of welcomes to the Little Boss: Amy Jessup, Administrations.

AoE Blog: So who the bloody hell are you?

Hi, Amy! Let’s start with the first festival you ever attended?

Super Bock Super Rock was the first festival that I ever went to. It’s a 3-day camping festival in Portugal. The year I went it was headlined by Arctic Monkeys, The Strokes, The Kooks and Arcade Fire!

So how did you make your move into the music industry?

I’ve always loved music! I’ve played piano since I was young, then I studied a Bachelor of Entertainment Management at the Australian Institute of Music. As part of my degree I did an internship with AoE and now I’m a fully fledged AoE team member!

The system works! So what have you been doing with us since you signed up?

It’s been busy! So far I’ve been a part of Fairgrounds in 2016, Lost Paradise over New Years, then FOMO and Laneway. I’ve been looking after AoE admin and socials, working on tour books and schedules for the Aussie Diplo and RL Grime tours, and seeing out our own BAD Friday gig over Easter. Then the big one that we just smashed was Splendour in the Grass.

What was the biggest lesson you learned on your first professional gig?

That even the smallest parts of the job matter and attention to detail is key. Whether it’s ensuring the right people have the right accreditation, updating schedules and contact details, to recording who has a radio – it all matters and makes sure the event runs smoothly and seamlessly.

The incredible women of the Aussie music industry inspire me! There are so many badass babes crushing goals, putting on awesome events and creating beautiful music. I have a bit of a girl crush on Nina Las Vegas actually – she is such a champion for the Keep Sydney Open movement and for women in the music industry. She kills it!

Well, I have been known to make the perfect cup of tea…

I think it’s the British side of me coming out – we’re very particular about our tea. None of this milk-in-first nonsense, and the brew time is crucial.

As you say, attention to detail is key. What are some big things you’re hoping to achieve in the next, say, 5 years?

Lots of learning ahead! A big goal is to become an Event Manager and be looking after and running events myself. Until then, it’s being involved in as many festivals, events and tours as possible, getting lots of experience and learning as much as I can.

Who would be your dream tour to produce?

Arctic Monkeys, for sure!

One for the road – a minute ago you finished bump out on the biggest festival you’ve ever put together. What’s your refreshing beverage of choice?

Amy is currently kicking ass and taking names across all AoE shows. Drop in to the Big House and she might even show you how to make the perfect cup of tea. If you ask nicely. 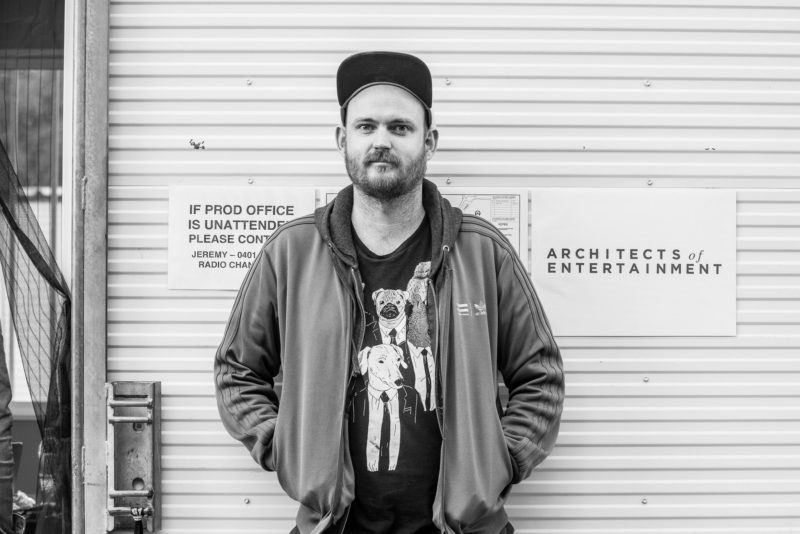